Just for fun! A quick post to request nominations for the Shorty Awards!

It's a little bit of fun, but also twinged with a bit of seriousness. My goal since I started this journey was to get more people to see, or see through my eyes, this beautiful sport of motorcycle racing, especially here in the USA. My home for the past 20+ years.

So it doesn't take long, but so far I/we are up to third spot in the #art category...so let's see if we can get a little higher. Thank you for reading. Oh, and Wrooom with Valentino Rossi, Nicky Hayden, Fernando Alonso and Massa will be happening in Italy on Monday.

Wish I was there too..! Thank you! Now please vote!
Posted by Andrew Wheeler at Saturday, January 08, 2011 No comments:

Goodbye and thank you RoadRacerX...

I had seven cover images with RoadRacerX magazine during the last five years.

Normally the end of the year is filled with anticipation. Yes, things change and a new year ushers in a feeling of rebirth. On Friday, New Years Eve a magazine with which I have worked with since I started shooting motorcycle racing closed it's doors. My photographs appeared many times in this magazine (and online)so much so that I am grateful that through RoadRacerX I was able to secure additional work and visibility I possibly wouldn't have attained anywhere else. Working alongside Chris Jonnum and Laurel Allen ("CJ and "LCA" respectively) I covered many of the world major racing series as a "retained" freelancer. 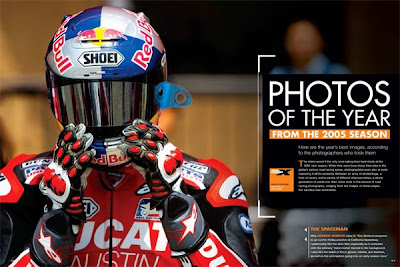 This image of Eric Bostrom was one of my favourites and was the first image used in what would become an annual tradition from thereon out. RoadRacerX's Pictures Of The Year feature which would highlight photos from such greats as Andrew Northcott and Mirco Lazzari to name a few...I would go on to have numerous opening spreads featured in this magazine along with many many others, along with assignments and opportunities as a result. I wrote two features for the magazine. One of Ben Spies when he burst onto the world stage in the World Superbike series in 2009 where I interviewed him at Phillip Island in Australia. Earlier this year, 2010, I would again visit Phillip Island where I would interview Roger Hayden (brother of Nicky Hayden) and Jason DiSalvo on their championship attempts at World Superbike. Again I would supply the text and the images for the feature. Yes I can write too!! 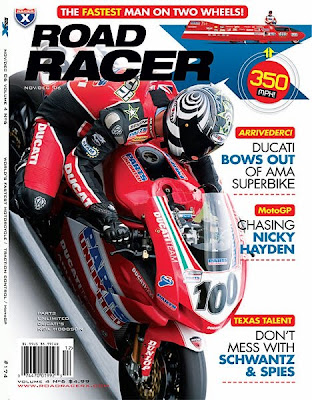 My proudest moment though came with the my first ever cover on a magazine in the USA, my adopted home. It was a picture of fellow countryman Neil Hodgson, aboard the Parts Unlimited Ducati Superbike. I still get a chill when I look at the cover, knowing how I felt at the time. With that I will simply say. Thank you for allowing me the opportunity to be a part of one of the best road racing magazines on the planet. With some fo the best people working inside it's covers. Thank you.
Posted by Andrew Wheeler at Sunday, January 02, 2011 No comments: