My 2009 Review has been available for a whiles, but with one thing and another it took a whiles to set up the store..but here it is.. 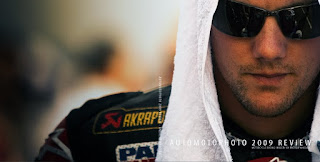 For more information on ordering go to AutoMotoPhoto 2009 Racing Review website
More from Le Mans next week!
Posted by Andrew Wheeler at Saturday, May 15, 2010 No comments:

I had a swifty interview with Laurel Allen of RoadRacerX today for their Between The Races feature that happens every Wednesday... 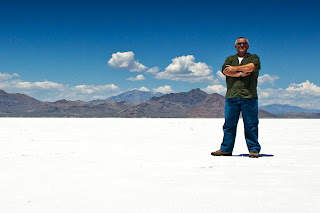 RoadRacerX Between The Races with Andrew Wheeler
Have a read!  Or follow me on Twitter/AutoMotoPhoto or become a fan on AutoMotoPhoto Facebook Fan Page and share your comments!

Next trip, Le Mans, France for the next round of MotoGP!
Posted by Andrew Wheeler at Wednesday, May 12, 2010 No comments: 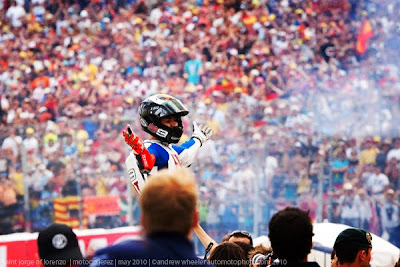 Interestingly this is/was my third visit to Jerez inside twelve months. The same time last year was for my first visit to region for MotoGP, the second visit in October 2009 was with my wife Emily as a holiday, and now, here I am again in the same wonderful town for MotoGP once again. I love coming to Jerez. Truly feels like home. 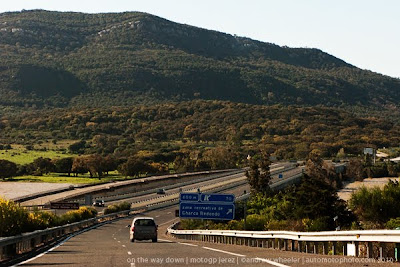 Fortunately, just prior to my leaving, the "volcano that cannot be pronounced" appeared to have known about my visit and started behaving itself towards the end of the week that I had planned to leave for Spain. Air France had started returning to its normal transatlantic flight schedules and I could stop panicking about whether I would get there or not. I arrive into Malaga Monday afternoon via Charles De Gaulle, pick up the rental car (A BMW series 3 diesel - again) and head towards Jerez along the coast. The sun is out, it's warm and with the windows down I take a nice easy drive along the main toll road that runs from Malaga, through Marbella, past the rock of Gibraltar and turns inland where one finally ends up in the city of Jerez. It's a nice drive. The toll roads are hardly used and the view along the way is spectacular. 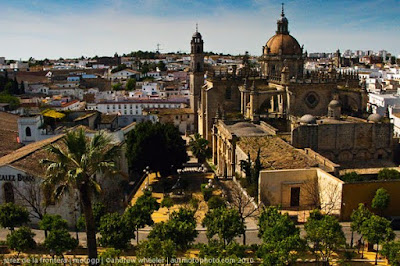 Arriving into Jerez I park just outside my accommodations, and after a brief chat with Alice and Jim, the apartment owners, I am in. I decide that I need to run to Carrefour to purchase some supplies for that evenings dinner, plus some beer, wine and water and I just make it in time before the store closes at 10pm! And they really do close. With supermarkets here in the USA they'll announce over the PA that the store is closing in 5 minutes and that's fine, but here, they turn all the lights off!! They obviously have no idea how hard it is to buy Leffe Brun, or at least differentiate between the Blonde and the Brun simply by using the incandescent glow of a Sony Erricson W600i mobie phone. It's all good. I pay, and I head back to the house. A shower, a quick dinner creation and it's time for bed. I sleep like a log. 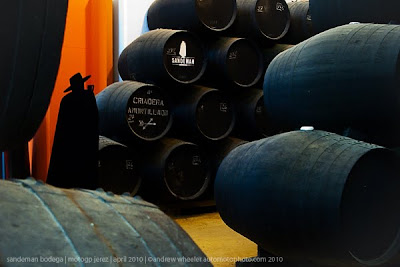 Tuesday rolls around, and I really do not get out of bed until noon! OOPS! I decide that perhaps it's time for a change and instead of taking the car out for a drive, I decide to go for another walk around Jerez. It's a pretty little town, with narrow streets, pretty flat with no major hills so to speak. I decide that maybe I should go to a different "Sherry House" for a tour vs going to Tio Pepe as I do each time I visit. I arrive at the Sandeman bodegas and along with 4 other people we're giving a tour around the front end of the business. In fact, it's only a 30 minutes tour, and although it's well presented it just doesn't come upto the quality tour that is the one given at Tio Pepe. After this tour, in which felt a little rushed, I decide to kill some time, go for a walk and go back to the Tio Pepe bodegas for the 18.30 tour later that day. 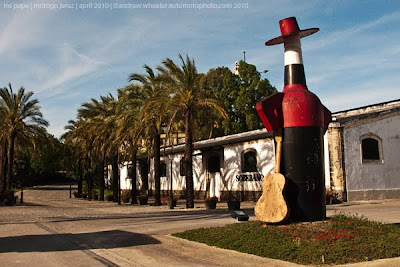 In the meantime I have a couple of hours to kill. I decide to visit the Alcazar of Jerez. Emily weren't able to visit this building last year, and it's just across from the Tio Pepe bodegas so it makes for a good side trip fitting in nicely with the schedule. Due to the time of year, again, I have this place to myself so I just walk around, then sit on a bench and soak up the lovely warm sunshine whilst enjoying the perfume being given off by the flowers in the garden. Perfect. The Alcazar closes at 5.30, so I leave head over to Tio Pepe, purchase my ticket and sit in their orange groves waiting for the tour to begin. The tour starts and by 7.45pm we're done, so a few purchases in the souvenir shop and I'm heading back to the apartment. Shower, dinner, a chat with Emily over webcam, then it's off to bed. We'll head off to Seville and their Alcazar on Wednesday. 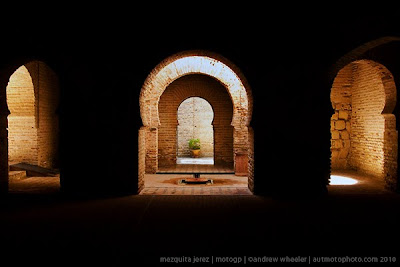 I love sleeping without the use of an alarm clock. I wake at 9am. Make coffee, have some chocolate all bran, shower change and am out the door by 11am. The drive to Seville is quite pleasant. About an hour. Arriving into the city through a 6 lane wide boulevard, I have forgotten the street peddlers from last year who like to try and sell you packets of tissues. It's odd. I have never thought about little packets of tissues being something that someone would want whilst sat at a traffic light. Maybe the Spanish buy more of these little packets of tissues than anywhere else. I suppose it's less of an intrusion that someone washing your windshield and then trying to demand you pay the for the work you never wanted in the first place. Everyone has to try and make a living some how so I can't truly knock it. I suppose it isn't much of a stretch to be someone trying to sell photos huh? 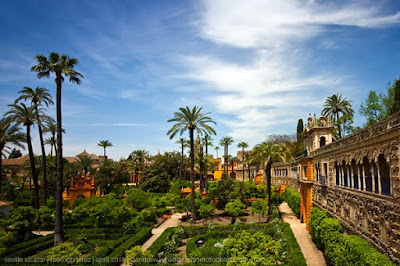 I park in the same place Emily and I parked last year. Oddly enough in parking space #46! I then head up to ground level and make my way to the Alcazar. It's off season, the weather is perfect, the crowds are manageable and I enter the Alcazar. This place is a must see. It's simply so nice to walk around, sit in the shade, listen to birds and watch people doing the same. It's a world away from what I do normally, the noise, the crowds, so for me, these outings to locations such as these are a way to recharge and just be a visitor. The Alcazar is for want of a better description, a castle. It's a walled palace, with gardens, baths, shaded walkways with palm trees, fruit trees, gardens and waterfalls. Exquisite. I leave a couple of hours later and stop for some tapas, after all, this is where tapas started! I go for tuna with tomatoes on toast, and a nice big glass of cold beer and kill an an hour or so watching people eating ice cream watch me eating tuna. Time to head back to Jerez. 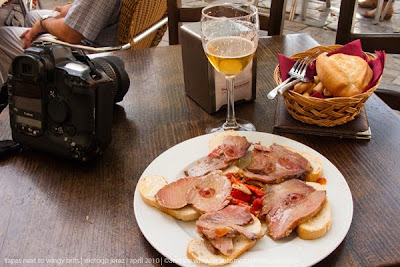 Thursday the real world of motorcycle racing, or my "job" kicks back into gear so it's off to the track I go. Arriving early afternoon, Thursdays have become a bit of a "White Elephant" in terms of doing any work. With engines being "blipped" in the garages below as the teams prepare the bikes for the weekends action, the only thing that really happens on a Thursday is the press conference at 5pm and that's it. 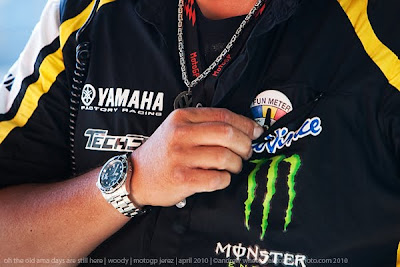 Friday mornings are a little busier than Thursdays, but with no on track action until Friday afternoon, everything is very low key. Even the number of fans attending on a Friday is less, possibly because they're not willing to spend money for half a days activities, and the accompanying costs of hotels etc. Why not arrive Friday evening for the weekend and save a days expenses? 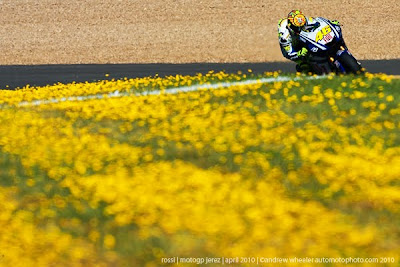 Oh that's right!! I'm here to photograph the racing! I am going down with the flu as this seems to be the time of year I catch something and it tries to incapacitate me. Andrew Northcott has agreed to help run me around on his scooter (too kind and I am immensely grateful) and so at least I can pace myself over the weekend and not make myself any more sick than I need to. Sitting in the media centre with David Emmett from Motomatters, Julian Ryder and Toby Moody from Eurosport along MotoGP technoboffin Neil Spalding, the off track entertainment is already taken care of. 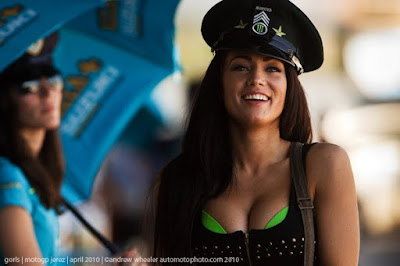 The weekends events follow their well scripted chronological paths, with Friday afternoons practices, Saturday mornings practices followed by Saturday afternoons qualifying. The weather is again, perfect. The crowds on Saturday fill the hillsides and add the signature colour that would be repeated ten fold on Sunday. 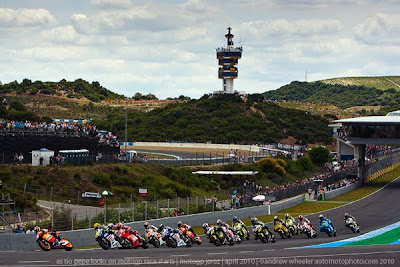 Sunday. Race day arrives. It is a huge event, with air horns, whistles and a new feature, someone has brought in a ships foghorn that when "tooted" simply obliterates any other noise coming from the crowds. With huge crowds lining the hills, and with men trying to get their pictures taken with scantily clad umbrella girls, the smell of food being cooked mixed in with cigarette smoke, race day get's underway. The 125's and the new series Moto2 have their fair share of excitement and fairing to fairing battles, and initially MotoGP looks like it's going to be just another procession to the end. But no. Sadly Ben Spies drops out, and the field spaces out as usual with Spaniard Dani Pedrosa taking off on his own race in the distance. But that wouldn't last for long. We witness Jorge Lorenzo starting to run everyone down, catch and pass them. He passes Nicky Hayden, then passes Valentino Rossi and now he's closing in on Dani Pedrosa. In the meantime I am being whisked around the track at amazing speeds by Andrew Northcott from one shooting location to another and we simply witness Jorge Lorenzo catch and then pass his fellow countryman. Only to go on to win the race. 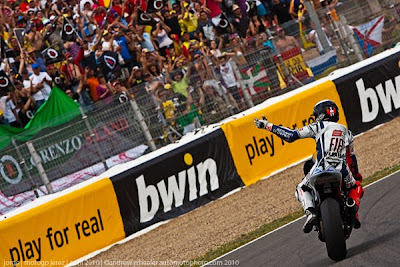 It was a Spanish hat trick, both the 125cc class and Moto2 class were won by Spaniards. Now the MotoGP class has been won by Jorge Lorenzo. Another Spaniard! The crowds are going bezerk! I am in the stadium section on the outside of the track and the noise is deafening as Jorge Lorenzo dismounts, plants his now customary "Lorenzo's Land" flag and walks to the tyre wall, whereupon he jumps up and salutes the crowd. After a few moments he returns to his bike, hops off in another location and jumps into a small lake..which we do not see from where we are located. We head back to shoot the podium and wrap up the days visual events. In a few hours after editing images, and uploading them to our various outlets, we head back to the apartment. After packing and getting ready to leave the next day we head off to bed. 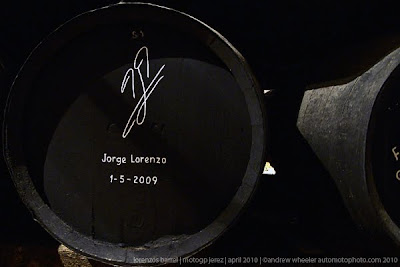 Monday, it's a swift drive to Malaga via Ronda. Tuesday, it's time to head home. Next race is Le Mans. We'll see what a swift visit to France brings!
Posted by Andrew Wheeler at Monday, May 10, 2010 2 comments: