What are Casey Stoner and Nicky Hayden doing? Interview with Andrew Wheeler (that's me)

It's the off season. Nicky Hayden and Casey Stoner are running around in the snow with the new Ducati GP10 as part of Ducati's annual winter romp which can be followed here on RoadRacerX's website . I've just ordered a couple of 1TB hard drives for the "big machine" at home and am currently planning my 2010 as I will be covering just MotoGP. With Moto2 as the new class, MotoGP looks like it's going to be exciting.

I know I posted this waaaay back in July, but seeing as some new people have discovered my work, I thought i may be appropriate to re-visit this wonderful video that those kind folks at OTT - On The Throttle put together.It can be run full screen by clicking on the little "icon" to the left of the volume adjustment on the status bar. Okay, I'm off to find something else to write about. Meanwhile, why not become a fan and join others on my Facebook Fan page.

Oh, and it's been a whiles since I shared a photo of our German Shepherd, Thor

Posted by Andrew Wheeler at Wednesday, January 13, 2010 No comments:

Photos Of The Year. RoadRacerX and Haga. Spies, Lorenzo, Stoner

A few published favourites from this year. By no means everything of course.

For the second time in the five years RoadRacerX magazine has been running this annual feature, one of my images from 2009 has been used as their opening spread for their Photos Of The Year. It is a shot of Ducati rider Noriyuki Haga at the Curva Parabolica, Monza 2009. 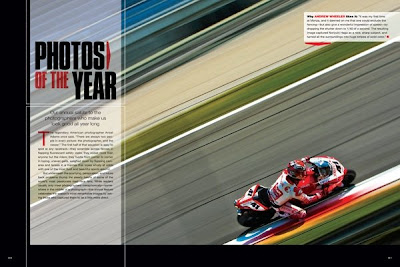 Closely followed by a cover shot of World Superbike Champion Ben Spies taken at the final round at Portimao and used on the cover of 2010 Parts Unlimited Magazine. 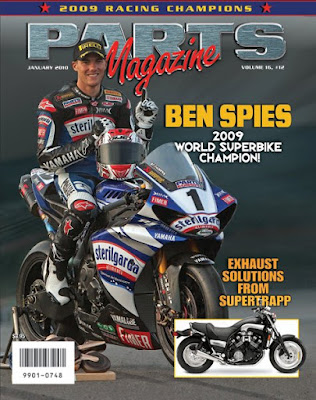 One of my favourite shots from the 2009 season of MotoGP was used as an opening spread in CycleWorld's December edition of Race Watch. It is of Jorge Lorenzo at The Indianapolis Motor Speedway. He had a custom made Captain America helmet, but, the reason why I like this shot is the fact that the clouds are reflected inside the "A". 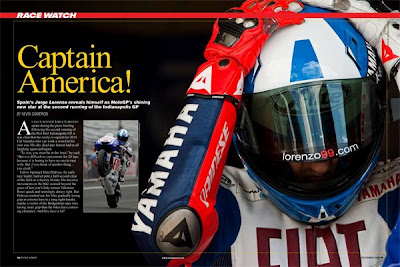 As I have been working with a European agency this year, quite unbeknownst to me one of my images of Ducati rider Casey Stoner, that was taken at Laguna Seca earlier this year, adorned the cover of the programme for the Gran Premio Generali de la Comunitat Valenciana! 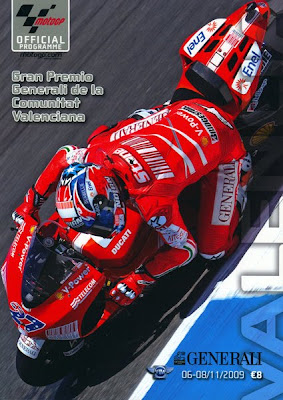 We're almost up to date!
Posted by Andrew Wheeler at Friday, January 01, 2010 No comments: