Hold on..I'm starting my time travel machine...More posts are on their way!

Starting with the Official Andrew Wheeler Christmas Card 2009. A quality collectors item and a big thank you to all who have been a part of the journey through 2009. I'm looking forward to to doing more in 2010. More, that's it!

Next!
Posted by Andrew Wheeler at Thursday, December 24, 2009 No comments:

The Rossi Print went for $8500. How Much Will A Rossi R1 Raise For Riders For Health? 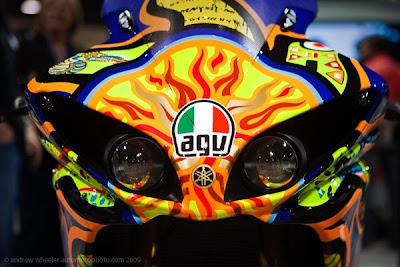 The print to canvas of Valentino Rossi adjusting his Aldo Drudi designed helmet helmet at Valencia in 2008 was sold at auction at the Indianapolis Motor Speedway Riders For Health Auction for $8500.

I attended the press day at the Long Beach Convention Centre in Long Beach California to capture images of the customised Yamaha R1 that publisher, Don Emde had put together with the help of Drudi Performance (the people that designed and painted Valentino Rossi AGV helmet), along with some help from Bob Starr at Yamaha (who donated the bike!), Roland Sands Design and others. 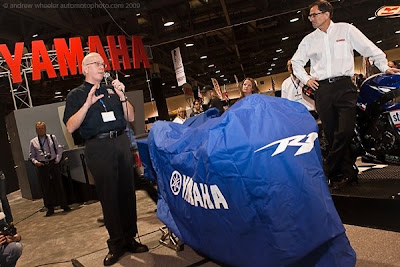 The repainted Yamaha R1 is going to be sold for auction at one of the two MotoGP events to be held in 2010, either at Indianapolis or Laguna Seca. 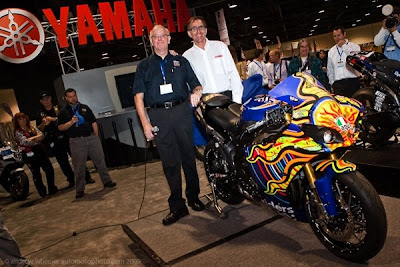 Striking as it is pretty, this should raise some well need funds for the Riders For Health charity. Watch out for more information and start saving!
Posted by Andrew Wheeler at Sunday, December 06, 2009 No comments:

It really doesn't take long to get from Granada to Valencia and is quite a nice drive.

So here we are, the last few days of our holidays and we have now arrived in Valencia. We're staying in the same apartment I rented back earlier in the year for the World Superbike Round. The final round of the MotoGP season took place at the same location, and seeing as I already had left sufficient funds to cover for a deposit it made sense to rent the same apartment. It's location is good, it's quiet normally! During this visit there was nothing but high winds all week long and at night it felt like you were on the deck of an aircraft carrier so sleeping was a tricky, if not a noisy affair. 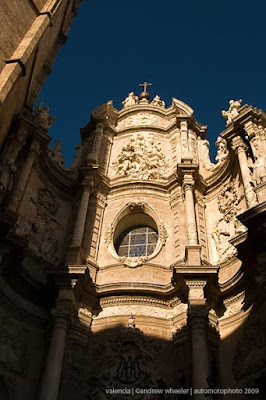 Emily and I didn't really have any plans here, simply to visit the old town, find a decent restaurant, and wind down with the end of year party with the GP folks. We stayed pretty close to base. We drove down to the Albufera which is a nature reserve a few miles south of Valencia. It is also near where Bomba rice (the rice used in Paella Valencia) originates and is grown, in huge rice paddy fields that line the small network of narrow two lane roads that crisscross this reserve. With the weekend approaching and the buildup to the final round of GP ahead we head to the track on Thursday to get set up. Alpinestars kindly set us up for hospitality access, and Emily is all set with her passes to allow her into the paddock and media centre (thank you so much for this - you know who you are). 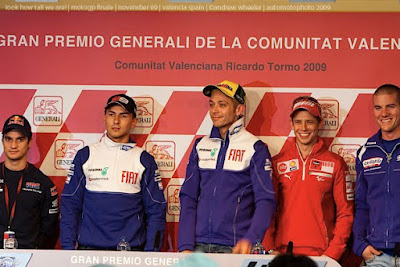 With Ben (Spies) being offered a wild card ride for the last round aboard a Sterilgarda liveried Yamaha M1, and his garage that is sandwiched between the Factory Yamaha's of Valentino Rossi, Jorge Lorenzo on one side, and the Tech 3 garages of Colin Edwards and James Toseland on the other, it is to me, rather quaint in some odd way. With the big beaming smiles of Massimo Merigalli (Ben's R1 team boss), Tom Houseworth his crew chief and of course Woody, along with a few other former team mates who came along to help out, it feel like we never really left Portimao. Except the bikes are louder and the paddock isn't quite as laid back as the World Superbike paddock. Ben is in good spirits. As his right hand man Geoffrey. Everyone is all smiles and are quite excited to have this head start for the upcoming 2010 season. Ben will take over from James Toseland and will be aboard the Tech3 Yamaha M1 for 2010 (yes I know it's not exactly news anymore...). So the atmosphere in and around this garage is still the same as it was in World Superbike. Next year though, I imagine it'll be a lot more intense though. 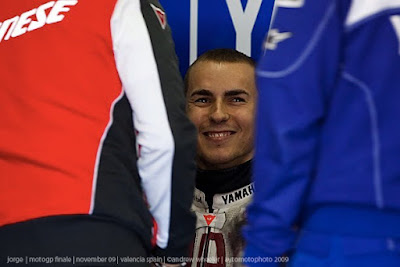 Tom, is still the master of hand signals. Woody, is on "observation" and pit board duty (apparently the team doesn't let you just dive straight into to work on machines - you have to observe first)...but Ben's garage still has that fresh positive air that existed throughout the World Superbike season. 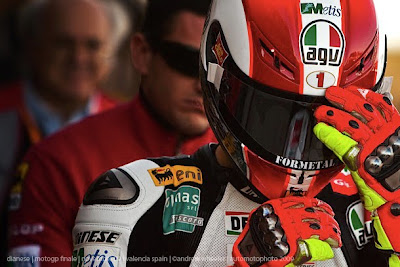 Friday rolls around and everyone is anxious to get out on track to start winding down the season. It's windy. Very windy. Holes are drilled in the fairings of the lightweight 125's and some of the fairing of the 250cc machines. 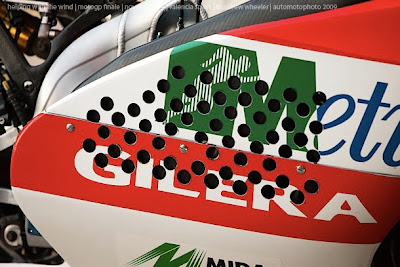 I'm a lucky boy again. Fortunately I'm able to use Ben's scooter for the sessions and thus am able to get around without much difficulty. 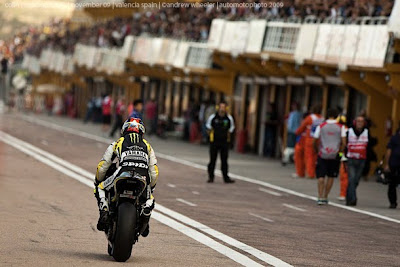 Saturday, practice in the morning, qualifying in the afternoon. It's still windy. Very windy and quite cool. During the afternoon qualifying went off as normal, but with the Championship having been settled and won by Valentino Rossi at Malaysia, all eyes (in the MotoGP class) were on Ben Spies. Being that he had won the World Superbike Championship in spectacular style in his first year (I'm not a fan of the word "rookie"..no idea way..just seems a little bit twee) this would be the story for the weekend. With James Toseland on his way out, and with Ben moving to Tech3 alongside fellow Texan Colin there was a lot of chatter about whether Ben would finish ahead of James. With Ben qualifying a good 9th (against James' 14th spot) and with Colin up ahead in 5th, and with the usual suspects ahead of Colin Sunday should be interesting. But there is still on more thing to take care of on Saturday. That is the BMW M Award. Valentino Rossi has won this prestigious award for being the fastest rider on the grid during all 17 rounds of MotoGP, not after spending some time "lusting" over the bright orange BMW M3 GTS and taking it for a lap around the circuit (I also heard he took delivery of not long thereafter and gave the M3 sedan he won to his Mum. At least I think that's the story). After returning to the presentation area, he then "hugs" the car he has won and is also presented with a scale model of the same vehicle. 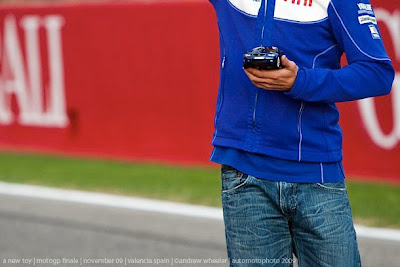 One thing that didn't go unnoticed, especially by my wife, was that Valentino Rossi is the expert of scarf tying, or rather, how to make wearing a scarf look totally snug! 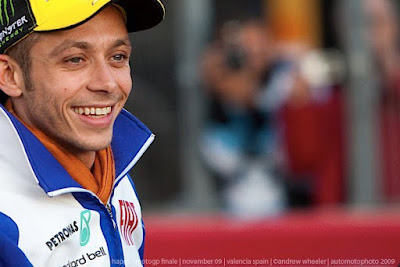 Sunday rolls around, and yet again, it's windy. Cool, but sunny. Thanks to Mary, Massimo, Geoff and the team, I am fortunate enough to have the scooter for the GP race. The other two races run their course and it's time for the "big boys". I go to the grid, which is (as usual) total madness, with photographers, riders, teams, fans with special passes, tv people and half of Spain all milling around. But that's part of the glamour of GP so you work around it. I tend to work rear of grid towards the front, thus, as everyone dives for the "main attractions" at the front, I'm treated to a free grid, and as everyone works their way to the back, I end up with free-ish access to the front of the grid. Tom (Houseworth) give me a "wave" and I head off the grid, onto Ben's scooter and off to grab the first lap (or two) shots with the pack. 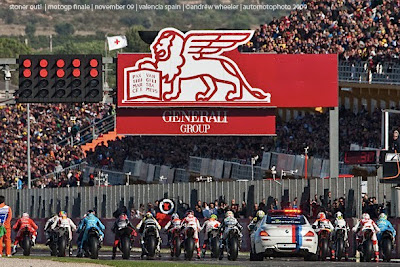 As the bikes head off the grid for their warm up lap, we wait for them to come around and most folks take a test shot or two to make sure everything is setup correctly. I'm stood next to Gigi (Soldano) and as all the bikes have passed he asks me "where's Stoner?". It transpires (as we know) that Casey Stoner had a little off on the warm up lap and that was the end of his 2009 race season. Which was a shame. This year has been particularly challenging for Casey and it looks like the last race of the year wasn't going to let him off easy either. The race is under way. I tend to use a race plan of 2 or 3 laps in one spot, them move, thereby giving you the opportunity to amass a wide variety of shots from different locations. Valencia is easy to get around, but with the crowds being a little lighter than past years, I wasn't always afforded the bright colourful pixelated backgrounds so you had to pay extra special attention to your subjects if you wanted to ensure a lot of colour. 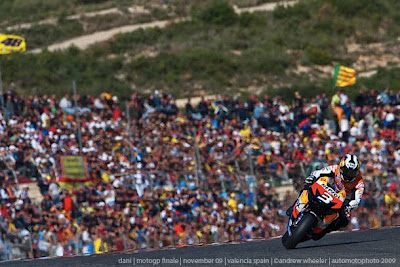 Well, the race at Valencia can be a little processional but as before, all eyes are on Ben Spies. He didn't disappoint. Finishing a healthy 7th place, ahead of a somewhat disappointed Andrea Dovizioso and of course James Toseland. Inadvertently, Ben also helped his future team mate Colin Edwards. By finishing ahead of Andrea Dovizioso he allowed Colin Edwards to take 5th place. Local lad Dani Pedrosa would win the race, with Valentino Rossi coming in second and Jorge Lorenzo coming in third. One thing that struck me as odd, and I think it was the high winds, was the lack of paella smells this year. Every year I have been coming here it has been a feature of this track. The somewhat fragrant whiff of seafood being cooked swirls around the track, but this year, nothing. After the podium, it's a quick shift into the the presentation for the top three class Champions and that it for the 2009 season. 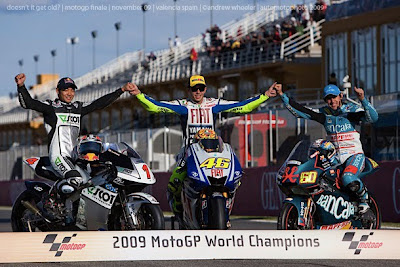 Back to the media centre, sort, edit and upload. By the time we left the media centre it was nearly 11pm. We had been invited to the Dorna end of year party. By the time we got back to the apartment, and then realising that it would be an additional 45 minute down to the Albufera, added to the fact I couldn't keep my eyes open, we called it a day. On reflection I wish we had gone to the awards presentation ceremony at the Aquarium. Maybe we'll do that for 2010. Monday afternoon would be spent back at the track for testing and Ben would be aboard the Tech3 Yamaha and there would be a number of "staff" changes that took place after seasons end.

After saying goodbyes to various people that would be it for my year of racing. 19 races in total. 8 World Superbike events, 8 MotoGP's and three AMA Superbike events here in the US. Thank you to the Sterilgarda Yamaha Italia team for helping make life a little easier too. 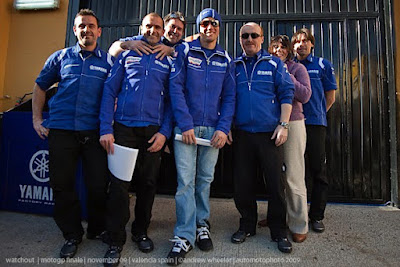 Quite the season. Thank you to my lovely wife for being who you are. I love you. I missed you so much whilst I was away. These three weeks with you were simply the best fun ever. 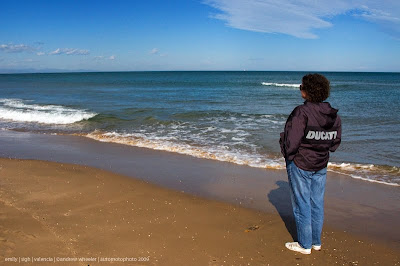 Tuesday, it would be up early, off to the airport and then the trip home back to the USA.
Posted by Andrew Wheeler at Saturday, December 05, 2009 No comments: