Jorge Lorenzo, Casey Stoner...from Misano to Aragon. The Renaissance, castles and the countryside...

I love castles.
So it's rather interesting that we go from the Adriatic and the home of Lucrezia Borgia (and all that lovely warmth and kindness as the perfect dinner host she was) to Aragon, where the two regions are actually loosely connected by families marrying one off to the other.  I love this region of Italy, the coastline that becomes extremely dramatic not too far inland with huge outcrops of rocks topped with castles.

Last years trip to Misano started out tinged with sadness  of the loss during the race weekend prior at Indianapolis. Little did we know that the race weekend at Misanowould also end in sadness (see the previous blog entry).  Fortunately, this years events ended with no tragedies but with an excellent showing of racecraft by Jorge Lorenzo...
The banner that shows his 100 victories has faded somewhat, but in many of the windows as before, there are cardboard cutouts of the maestro himself watching over the visitors.  One thing that was different from last year was the video booth.  This appeared so as fans visiting to send Valentino a personal message if support.
Gone was the life-size cardboard Yamaha team cutout and garage that was very popular with folks who wanted to have a picture of themselves taken with whoever works in the garage.  Maybe next year there'll be a Ducati version. 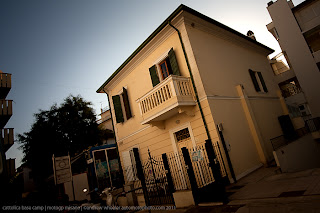 This year I stayed at a fabulous little flat in the city of Cattolica with Ben Spies Fan Club creators Luca Ottolini and his fabulous wife Chiara.  We had a great week of good food, laughter, Jesus ducks and of course being less than 3 minutes from a gelateria, gelato.
Lots of gelato....thanks again to Simone for being such a help in having the apartment for us....looks like next year we're all set for Misano too!
With that, it was back home for a few days before heading off (again) to Barcelona for the Motorland Aragon experience!  Arriving late into Barcelona it was then a solid 2-3hour drive to the lovely little village of Beceite.
I stayed here last year and we loved it so much not only did we come back, but we rented the entire building to avoid the racket we suffered at the hands of a rather large group of excitable motorcyclists who were upstairs.
This year, I shared the upstairs apartment with Andrew Northcott, Jules Cisek and his wife Bernadette.  Mr Motomatters, David Emmett, Jarno from Holland, Abraham (from Spain) and his friend occupied the floor we stayed on last year.That meant we had normality and tranquility upon our return from a busy day at the track.
As before the drive to the track winds through some seriously spectacular scenery.  Jules Cisek ran his Go-Pro during one of our morning drives and hopefully, when he has edited the footage, we'll have something to share here...we'll just back track a bit.
Motorland Aragon, as I explained last year, is out in the middle of nowhere, not far from the town of Alcaniz, which is also, out in the middle of nowhere.  That said, this area is chock full of history, especially related to The Renaissance, the invasions by the Moors, and long before that, the Romans and Greek.  Evidence in the forms of minarets, aqueducts and castles show the various cultural influences in the area.  It is well worth visit and a stay.
Race weekend came, sadly Friday was a morning only job.  A local transformer blew up and caught fire and that killed the power to the race track.  In the afternoon, because there was no timing and scoring, or power for anything it was decided to abandon the afternoons sessions.  Personally I felt the riders could've gone out and done some fan laps on scooters because there were an awful to of very disappointed fans in the stands who'd stuck out the heat and winds waiting for something to happen.
But that's me I guess.  Someone was so miffed off that they threw their sandwich at ME!!  I thought that was funny, but still.  I do feel something should be on hand for moments like this.  After all, this is all about entertainment IMO.
Race day rolls around, the factory Honda's roll out a rather interesting race day livery in some shocking orange colour (which initially I wasn't too keen on - but it looked good in photos).
The race wasn't exactly earth shattering, and Casey Stoner didn't surprise anyone by winning...with Aragon in the bag, it was back to the house.
With my flights to Barcelona that would take me to Amsterdam leaving on Tuesday afternoon, I had all day Monday to futz around and take it easy.  So, I left the house about 1pm and drove over a huge range of mountains to coast and the seaside town of Peñíscola.  It was just a zip trip to snag some photos of the castle on the Mediterranean (and I was reliably informed that this was the location for the making of the film El Cid by David Emmett) and so with some images captured I took the long route back to the house.
Returning in time to finish up dinner and celebrate Jules and Bernadettes wedding anniversary.  Which was a rather nice way to cap off a wonderful week in the Spanish interior.
Tuesday, I would drive to airport.  Eventually find my good friend Abel, have lunch, board my flight to Amsterdam and then spend a nice evening in my favourite hip-hotel at Schipol, CitizenM. The next day it would be an easy walk to the airport and eventually home.

Next up, Australia, Malaysia...but for now, I am enjoying my time at home.
Posted by Andrew Wheeler at Wednesday, September 28, 2011

mmm... those peppers.... thanks for sharing your "home" and culinary genius with us, AW :)

and yep - video will be available soon