Rewind! Valentino Rossi sells himself for $8500! 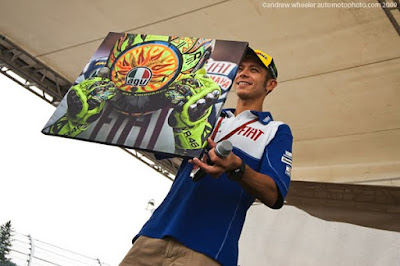 Ciao!
As they say here as I sit outside of my accommodations in the region known as Emilia Romagna. I am here waiting for the start of the final push (last three rounds) to the end of the World Superbike Championship which kicks off at Imola, just down the road from where I am staying. Heading onto Magny Cours then winding up in Portimao on the Algarve in Portugal.

After months of having the galleries of AutoMotoPhoto being non functional, I'm pleased to inform everyone they have been restored and are working with all versions of flash! If you haven't had a chance to catch up, make a big cup of coffee, tea, whatever, sit down and browse. So let's catch up, starting with the last race first and work backwards. It's a long post!

One of the most amazing things happened at the Red Bull Indianapolis MotoGP this past August. Very moving for both my wife who has supported me through my travels to get this business started and functioning, and extremely very beneficial for a cause she and I both believe in. I had offered Don Emde and the folks at Riders For Health a print to be sold for auction that would take place on Friday morning at Indianapolis. You can read more about Riders for Health here.

Don Emde had taken the print, a 20"x24" on canvas print to his Parts Unlimited dealers meeting on Thursday evening prior and had it in his truck. During the evening where Valentino Rossi signs AGV helmets to give to the various dealer reps at the function, Don thought he'd see if he could get Valentino Rossi to sign the print. Which he did and by all accounts was fascinated by what he saw. The plan for the Friday auction, which was run very much on schedule, was to have each rider bring an item for auction. For example, Randy De Puniet brought his boots, Nicky Hayden brought a Tissot watch and so forth. So you can imagine that when Valentino Rossi decided to "bring" my picture what an incredible honour (and thrill) this was for me. So after some banter, and some Q&A's from the crowd it was time for the auction. On stage with Valentino Rossi, were good friends Toby Moody and Ralph Shaheen 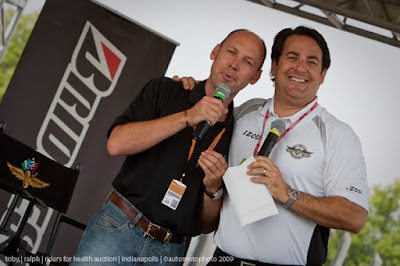 ...I'll let Dan Lo's video from the event tell the whole story..
As I said before, this was huge for Riders for Health, and huge for me and my wife on a personal level..and Darren Beatty captured a very special moment for which I am incredible grateful. 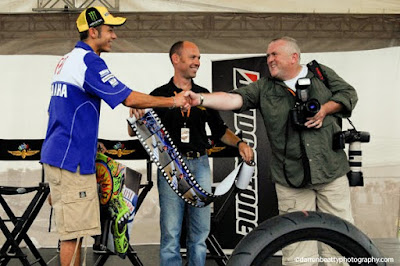 Weather-wise the weekend was good, aside from Friday afternoon when we had some rain. The crowds were good, and the organisation at the Indianapolis Motor Speedway was as always, first rate. One complaint though, the lack of willingness by those driving golf carts to be flexible and pick up photographers and being told that they "weren't authorised" was a little distressing. It's a huge facility and not everyone has access to a scooter, so hopefully we can get something done for next years visit. I can't wait, and as someone suggested on my FaceBook Fan Page, I'm going to have to top this one next year!

Coincidentally, it was a good weekend for Nicky Hayden, and maybe it was a "sign" that he graced the cover of Motorcycle Racer Magazine with one of my shots taken at Catalunya... 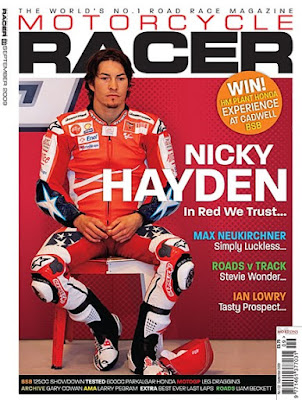 Continuing on our trip back through time, was a visit to the Czech Republic for the MotoGP races at Brno. Racing aside, there is a lot to see in this country. Beer and sausages and Indian food downstairs from my apartment, it was certainly a wonderful trip and I look forward to returning next year. Visiting caves deep underground 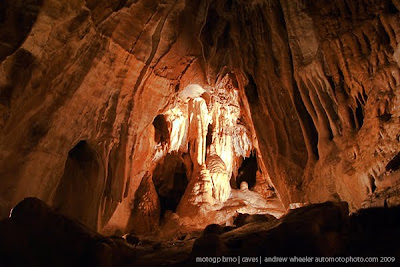 and relics of castles.

Speaking of places with castles...and also noted for it's beer and sausages. I visited the UK for both World Superbike and MotoGP, and being that they were only weeks apart it felt like I had never left. It was good to visit my Mum in Bath, see some of the old stomping ground where I met my wife 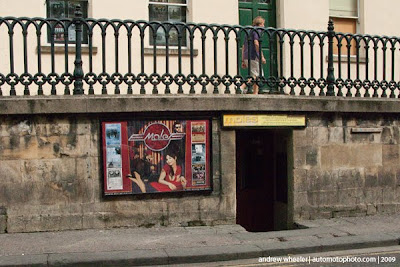 and enjoy some fine foods from a small organic butchers in Duffield by the name of "Croots". 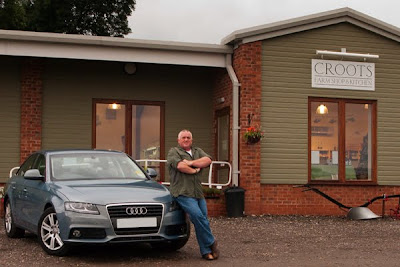 If you happen to be nearby, make a point to stop in and check out their produce. Wonderful foods, and wonderful service.

Between both events in the UK, we had my "home" race. Where for one race weekend I am able to be with Emily. I can sleep in my own bed, cook in my own kitchen and be home with all my little furry friends, Thor, Widget and Bean. It makes a difference especially when you travel as much as those covering racing worldwide to just be around your own "stuff". We also had a really cool Facebook "Friends" 10 minute gathering at the track on Friday evening, just to be able to put some faces to the names with who we "chat" online with. 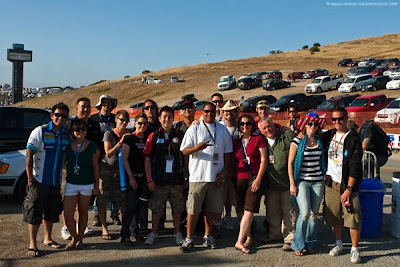 .Well, I think that's enough reading for now. Once again, check out AutoMotoPhotofor all the race weekend updates. I'm off to the see the Adriatic this afternoon, deciding the sea will be far more inviting than a warm, hot city (such as Bologna). So watch this space for updates from this weeks travels. Then next week it's onto Magny Cours in Burgundy. Two wonderful food and wine regions with good racing at either end...and a BIG THANKS to Randy Mamola for his help. It means a lot Randy. You and your family, Sharon are special people to both Emily and I. I look forward to seeing you all again soon. Oh, and good luck this week Chaz!

Ciao for now and thanks for reading...
Posted by Andrew Wheeler at Wednesday, September 23, 2009 3 comments: